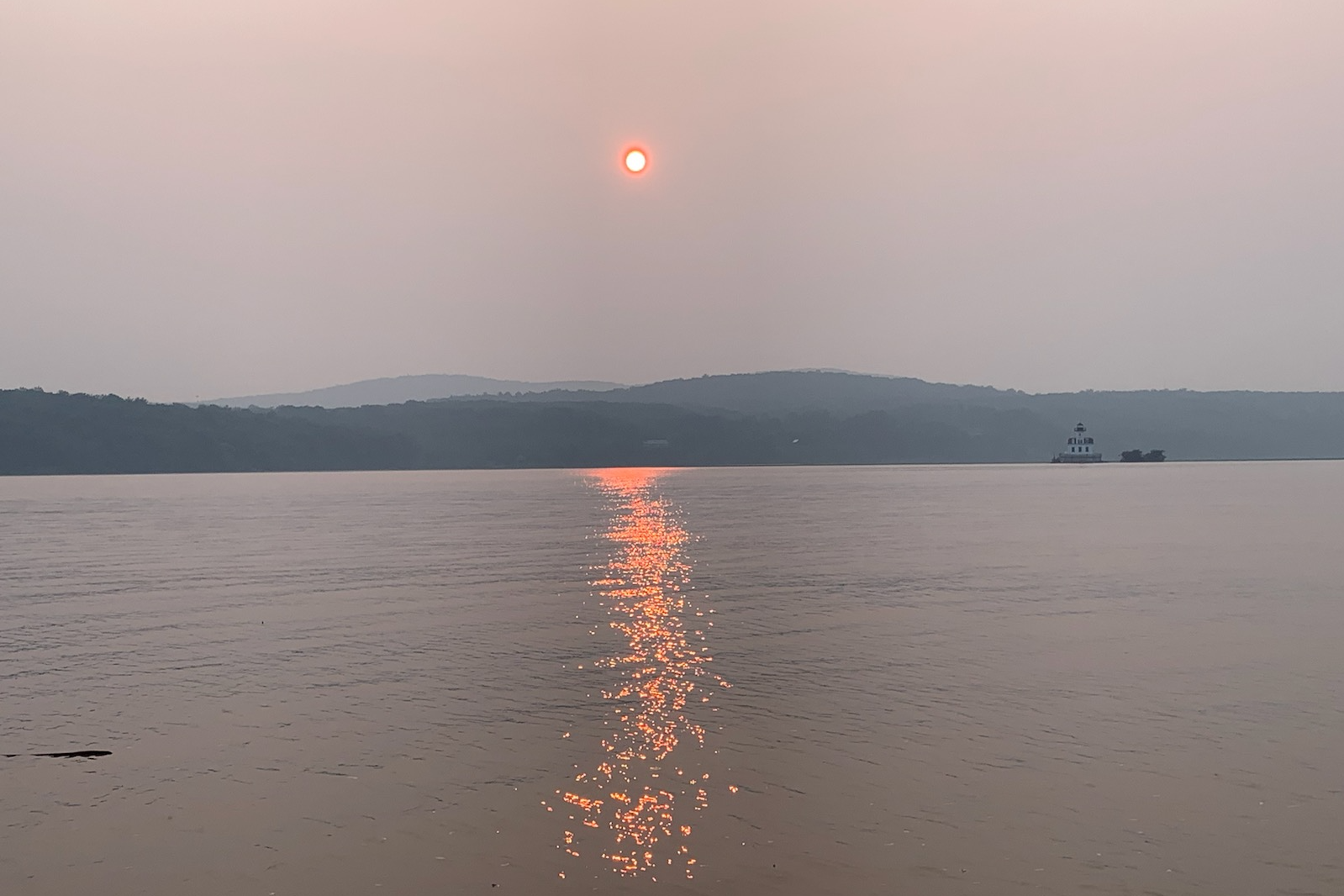 Image of the sun taken on July 20 off a boat on the Hudson River just south of Kingston, N.Y. Photo courtesy Ilana Berger
Smoke from large wildfires burning in the western United States and Canada led to potentially dangerous air quality conditions in the Hudson Valley in late July, according to the Kingston Air Quality Initiative (KAQI), a collaboration between the Bard Center for the Study of Land, Air, and Water and the City of Kingston. Sensors on the roof of the Andy Murphy Neighborhood Center on Broadway in Kingston—and confirmed by street-level monitoring in Kingston and on the Bard campus—showed significantly elevated levels of fine particulate matter (PM2.5) for several hours on July 20 and July 26. Although the levels didn’t exceed the 24-hour EPA standard of 35 ug/m^3 (micrograms per cubic meter of air), readings were found to be as high as 70 ug/m^3 for several hours at multiple locations. New York State issued air quality warnings for the entire state that week.

“Being able to track real-time effects of climate change-related disasters on local air quality is a powerful tool supporting Kingston's efforts to become a sustainable and climate-adapted community,” said M. Elias Dueker, assistant professor of environmental and urban studies at Bard College and director of the Bard Center for the Study of Land, Air, and Water. “While wildfires are predicted to continue in the West, and we may not be able to prevent the smoke heading our way, we can do work to limit our own contributions to poor air quality locally, including car exhaust and wood burning. These actions are not just good for the planet, but good for ourselves and our neighbors. Our Hudson Valley air is precious and we must protect it.”

PM2.5 is made up of microscopic particles that are the products of burning fuel, and is released into the air through exhausts from oil burners, gas burners, automobiles, cooking, grilling, and both indoor and outdoor woodburning. PM2.5 particles are so tiny they stay suspended in the air for long periods of time, allowing them to travel long distances before depositing. When these particles are inhaled, they can enter the bloodstream through the lungs, creating or exacerbating health issues. Several studies have shown that PM2.5 produced by wildfires or by burning wood is more dangerous to human health than that produced, for example, by vehicle emissions. A study from UC San Diego Scripps Institute was released very recently showing the PM2.5 emitted by wildfire smoke results in up to 10 percent more respiratory admissions to hospitals than other sources of PM2.5.

KAQI’s monitoring efforts over the past year and a half have focused on a regional assessment of air pollution from fine particulate matter (PM2.5), as measured from the roof of the Andy Murphy Neighborhood Center on Broadway in Kingston. While KAQI’s first year of monitoring found that levels of PM2.5 rarely reached dangerous thresholds as regulated by the EPA, this summer has been a different story, going beyond local fuel combustion. Smoke plumes from the fires raging out west have been travelling across the continent over the past few weeks, resulting in hazy skies and prompting several air quality alerts in the midwest and northeast. As wind and temperatures pick up out west and worsen fire conditions, the effects will likely continue to be felt in the Hudson Valley as air packets over burning areas travel east and eventually deposit from the upper to lower troposphere, affecting the air quality at ground level. Dueker said that wider-scale community and neighborhood-level monitoring are on the horizon.

The Kingston Air Quality Initiative began in January 2020 as a partnership between Bard’s Community Science Lab and the City of Kingston Conservation Advisory Council’s Air Quality Subcommittee to conduct a first-ever Kingston-centered air quality study. Since then, Kingston residents and Bard College students, staff, and faculty have conducted air quality monitoring in both indoor and outdoor environments. Bard’s air quality monitoring program is supported by the Open Society University Network Community Science Coalition, which works to bridge the gaps between climate-adapting communities and academic institutions. For more information on KAQI and specific details on the wildfire monitoring, please visit landairwater.bard.edu/projects/kaqi or kingston-ny.gov/wildfires. To get involved, please contact Eli Dueker at edueker@bard.edu.

About Bard College
Founded in 1860, Bard College is a four-year residential college of the liberal arts and sciences located 90 miles north of New York City. With the addition of the Montgomery Place estate, Bard’s campus consists of nearly 1,000 parklike acres in the Hudson River Valley. It offers bachelor of arts, bachelor of science, and bachelor of music degrees, with majors in nearly 40 academic programs; graduate degrees in 11 programs; eight early colleges; and numerous dual-degree programs nationally and internationally. Building on its 161-year history as a competitive and innovative undergraduate institution, Bard College has expanded its mission as a private institution acting in the public interest across the country and around the world to meet broader student needs and increase access to liberal arts education. The undergraduate program at our main campus in upstate New York has a reputation for scholarly excellence, a focus on the arts, and civic engagement. Bard is committed to enriching culture, public life, and democratic discourse by training tomorrow’s thought leaders. For more information about Bard College, visit bard.edu.
# # #
(8/3/21)